A community effort to honor the legacy and history of a
Miami Modern landmark. 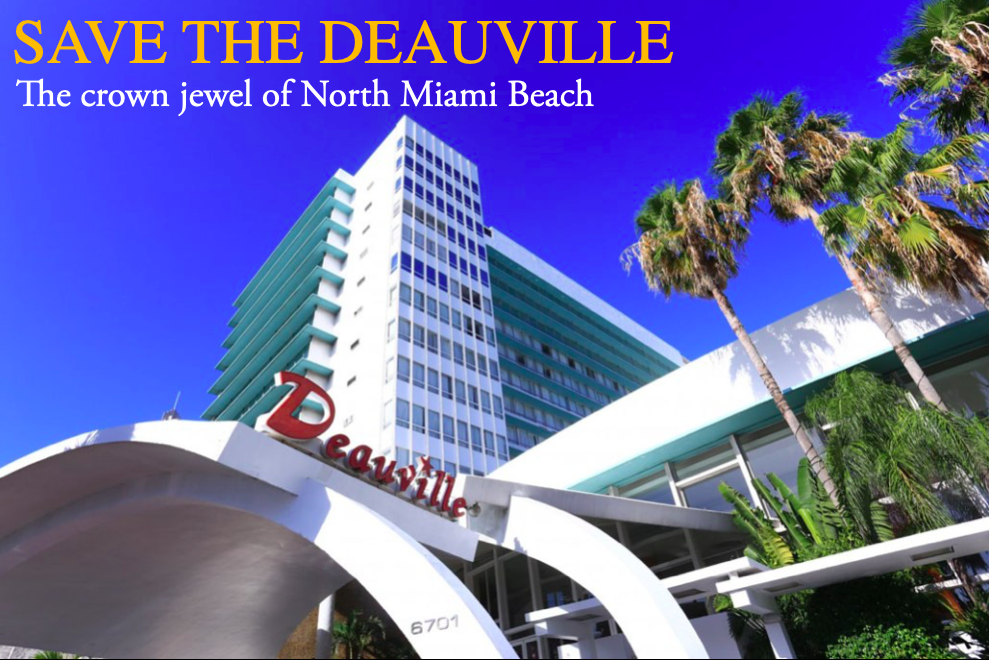 As Mark Twain is reputed to have said, "The reports of my death are exaggerated."

Many people are under the mistaken impression that the Deauville Hotel and Resort has already been fully demolished - this is not correct.  It stems from multiple news media writing about the fact that the city has issued a demolition permit, but not parsing the finer details of what the process entails, and that some demolition has indeed begun.  More about that in a minute.  But for now, know that the Deauville still stands, albeit a bit battered and bruised.  Here's the latest.

1.  The big news is that the Miami Design Preservation League has published the long-awaited report from an independent structural engineer, and it gives a lot of reason for optimism.  MDPL had hired its own engineer to review the data provided in the original report, and the short version is that the data presented in the owners' report, and the conclusions reached from it, do not support the City's building official deeming total demolition necessary because of an imminent threat to life safety.  As such, there was no reason for the owners and the City to circumvent the normal process of getting approvals of how the building would be renovated from the Historic Planning Board, and beginning an unnecessary demolition without a plan of what will follow.

This report (read it here), has been shared with the Miami Dade County Board of Rules and Appeals, and the hearing date is confirmed for 11 a.m. on Thursday 4/11/21.  All interested parties are highly encouraged to attend in person; a zoom link and further details will be shared closer to the time.
2) Meanwhile, there has indeed been some demolition.  If you're not already familiar with the Meruelos' unfortunate history, this may have come as a shock, but for those who are familiar...not so much.  Just a week after the Judge's ruling (read the transcript) and two days after the City issued the final demolition permit, on a gorgeous Saturday afternoon with NO NOTICING of affected business and residents, the Meruelos moved in with their tools of destruction.

With seeming malice aforethought, they tore down pieces of the iconic porte cochere, leaving the iconic Deauville in the debris like something ready to be sold for scrap metal.  It could not have been a bigger "up yours" to the City, the North Beach community, and those who have been following this story around the world.

Since then, some limited demolition work continues, with questionable asbestos mitigation, and with absolute blatant disregard for historic elements.  When asked by the City about architecturally significant elements worthy of saving, the owners have not shown themselves willing to partner with the City, or the many cultural institutions interested in giving those elements a home (or, ideally, reincorporating those elements in the renovated hotel).  Again, par for the course with these owners.

This is a big day for the Miami Design Preservation league, and your donations have been instrumental in getting us here.  We continue to ask you to share this link with others who may be interested in the preservation of this crown jewel of North Beach...the anchor of the Miami Beach Historic Hotel District. The Deauville, designed by architect Melvin Grossman, contemporary of and collaborator with Morris Lapidus, is a glorious architecturally significant example of the MidCentury Modern (MiMo) architecture, with its exuberant post-World War II optimism, and its eye to the future, has been the economic driver for this North Beach community up until the owners intentionally let it fall into disrepair, starting in 2017, with a stated desire to see it demolished. Every share helps build awareness; every dollar helps fund the appeal before BORA.  Together, we continue to work together to #SaveTheDeauville.
Thank you.
CLICK TO DONATE

IT WAS MORE THAN THE BEATLES…

DEAUVILLE AFFADAVIT: LEARN ITS HISTORY -- AND UNDERSTAND ITS IMPORTANCE 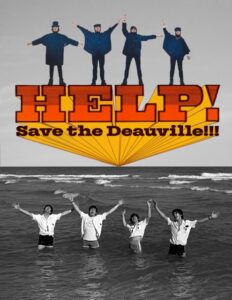 THANK YOU FOR YOUR DONATIONS...

AND THANK YOU, MITZI GAYNOR, FOR YOUR SUPPORT! 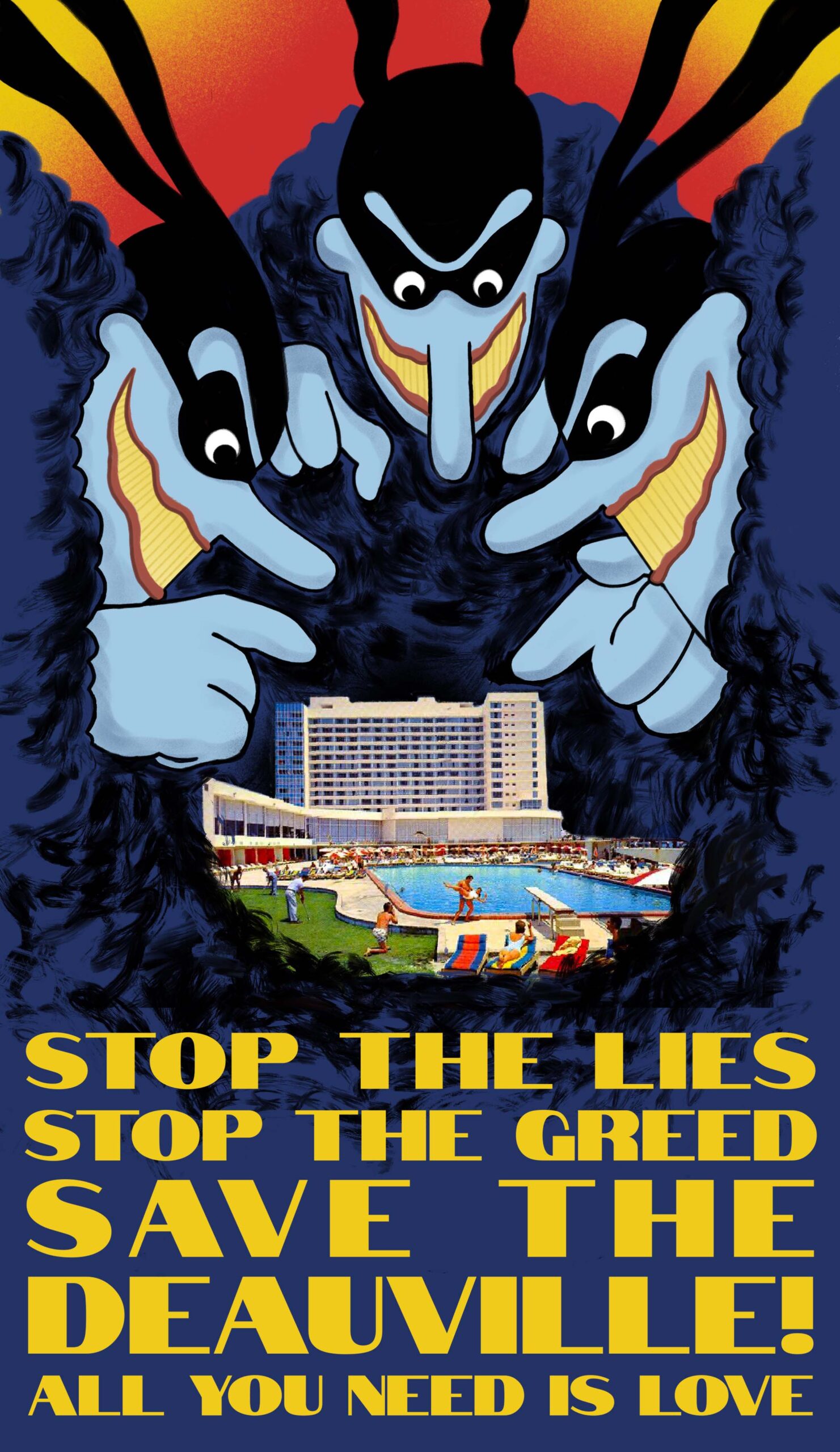 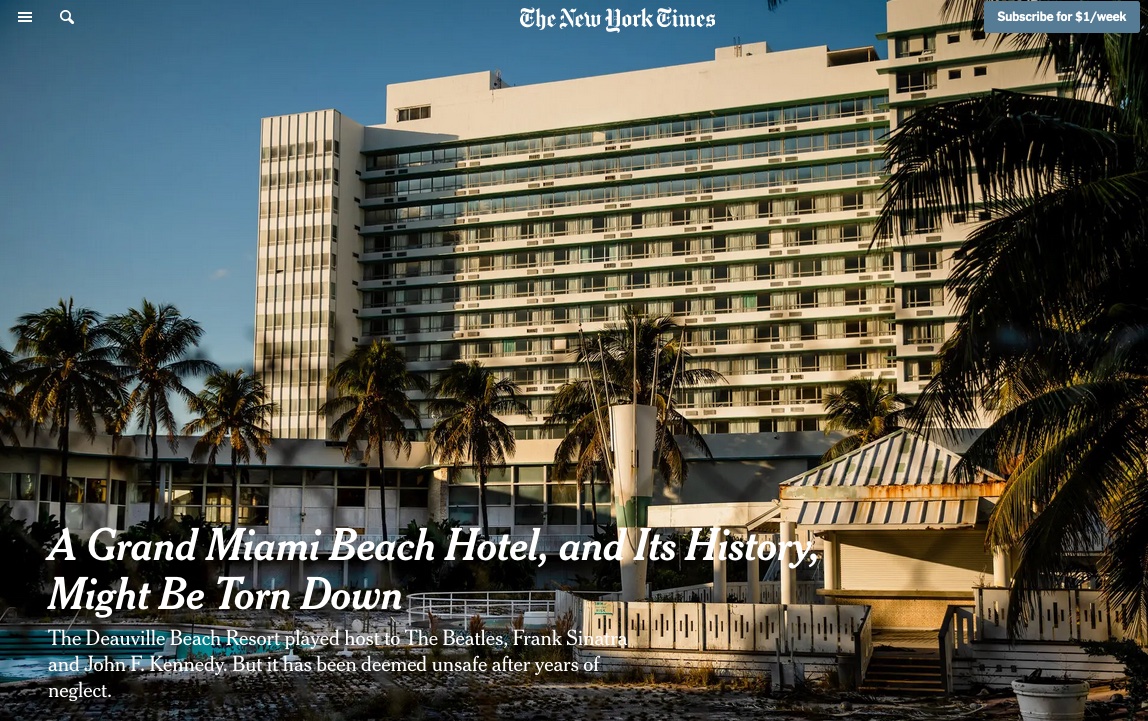 New York Times feature on the sad saga of the Deauville

"The ability of the owners to methodically destroy a priceless piece of North Beach history and shutter an engine of our economy for five years, all of it in plain sight, clear for all to see, is a testament to the inability of our laws... to protect our history and our community. "

The sentiments of a resident of the Deauville District spark additional questions which deserve careful consideration regarding the process and procedures which have led to this point:

• Why was this LTC issued after 5 pm on a Friday night?

• Why was the demolition hearing process not allowed to happen as anticipated at an upcoming HPB meeting?
• Why is this issue not on either of the upcoming HPB meeting agendas, as of this morning?
• Why would this not be included under the Residents' Right To Know - while the letter of the law may only call for noticing property owners within a 375' distance 10 days prior to a scheduled demolition, the SPIRIT of the law would suggest that the recommendation to demolish such an enormous building with national and arguably international historic significance, and economic impact affecting the entire North Beach community, may merit noticing further, wider, and earlier than what's mandated.
• Why was the structural assessment report - commissioned by an owner who has made it clear that they do not respect the rule of law (see the countless unpermitted projects, the refusal to fix them, the refusal to pay fines, the litigation of citations, their own personal home violating code and their refusal to remediate the situation, etc. etc. etc.) and who has made it clear that they wish to be rid of the building - accepted at face value, with just city verification of its findings?
• Why did the CITY not hire an independent engineer to do the structural assessment report and bill the costs back to the owners?
• Why is this being slated for TOTAL demolition?  A total demolition is draconian; where is the discussion of how to preserve the key elements, if demolition cannot be entirely forestalled, such as the dramatic sweeping porte-cochere, and the legendary Napoleon ballroom from which the Ed Sullivan show was broadcast, as well as the front of honeycomb pattern ornamental hollow clay blocks for the ballroom facade facing collins, which have been incorporated into ALL the previous restoration plans we have all seen?
• Why the sudden haste to move to total demolition within five months, when the building has been sitting derelict, with squatters living within, for the past 4+ years?
• Why should there be any confidence that the ordinance regulating what can go there should there be a partial or complete demolition, be upheld in practice? (See "demolition" in Section 118-561 in the MuniCode; screenshots below.)  Sec. 118-503 (b) (2) and (3). - Scope, policies and exemptions; specifically "Replacement of existing structures'' and "Replication of demolished contributing structures."
• Why did the owners not proceed with their proposed and approved plans for an upscale project, including "partial demolition, partial reconstruction,alteration, renovation and rehabilitation of an existing hotel complex, as well as the construction of a new 21-story residential structure." as of March 12, 2013
• Why is the city rewarding arguably the most egregious case of intentional demolition by neglect (municode sec 118-532 sec g) imaginable by effectively granting exactly what the owners seek? The owners have not acted in good faith on anything, and are responsible for years of code violations, many of which they caused themselves with unpermitted work, and which went largely uncorrected, in the service of getting this building demolished. Why on earth are we not going through the process as mandated by the HPB rather than giving them what they've wanted for so long?  The owners are in the business of hospitality, casinos and construction, and have a history of buying derelict or run-down hospitality properties, investing a bunch of money into them, and minting cash at the restored casinos. There is no way on earth that they didn't - and don't - know exactly what they're doing.

With this, the HPB will be able to hear the application and review the family’s proposal. Once these details are made public, community input will be heard at a public hearing where five of the seven HPB members would have to vote ‘yes’ to allow the demolition of any part of the building.

With that in mind, we urge the public to be on high alert and vigilant since it is well past time this issue is resolved favorably to preserve, protect, and rehabilitate this building. The fight will be challenging and stems from a series of small incidents that have created a major impasse. Rather than investing in a small set of upgrades caused by an electrical fire in 2017 (which itself was caused by an unpermitted electrical work), damage was exacerbated as a result of the 2017 hurricane, and the hotel has been closed ever since.  The family has aggressively pursued a course of ‘demolition by neglect’ that is not only destroying this landmark and historically-contributing property, but has adversely affected the encompassing business and tourism community to the extent that squatters are now occupying rooms once visited by paying guests.

Although the story of the Deauville is a sad, tragic, and completely unnecessary plight driven by greed and a lack of historic perspective, the City, as well as the community, knows the solution. It is preventing the family from committing ‘demolition by neglect’ and enforcing in-place policies that lead to ‘restoration by design’. 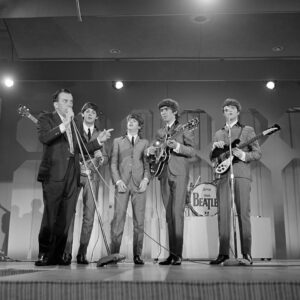 Sixty years after the debut of the Hotel Deauville, decades of neglect forced this classic resort to be shuttered. Recognizing its rich history which includes guests such as President Kennedy, Frank Sinatra, and Judy Garland, it is best known for its most famous visitors: The Beatles, who called the Deauville their Miami Beach home when they arrived to perform live on The Ed Sullivan Show from the hotel's Napoleon Ballroom. Driven by history, a collective of historians, writers, musicians, journalists, community activists and Beatles fans across America and around the world are now focused on efforts to restore the landmark hotel and have launched the 2/16/24 Initiative t 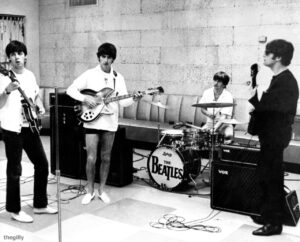 o assist the hotel's owners, the City of Miami Beach, and the Miami Design Preservation League in re-opening the restored hotel in time for the 60th Anniversary of the Beatles' 1964 appearance.

We encourage you to look through our historic archives, read newspaper and magazine reports, watch videos, and learn more about this magnificent Miami Modern hotel. And then add your voice to this worthy cause.

News Past and Present 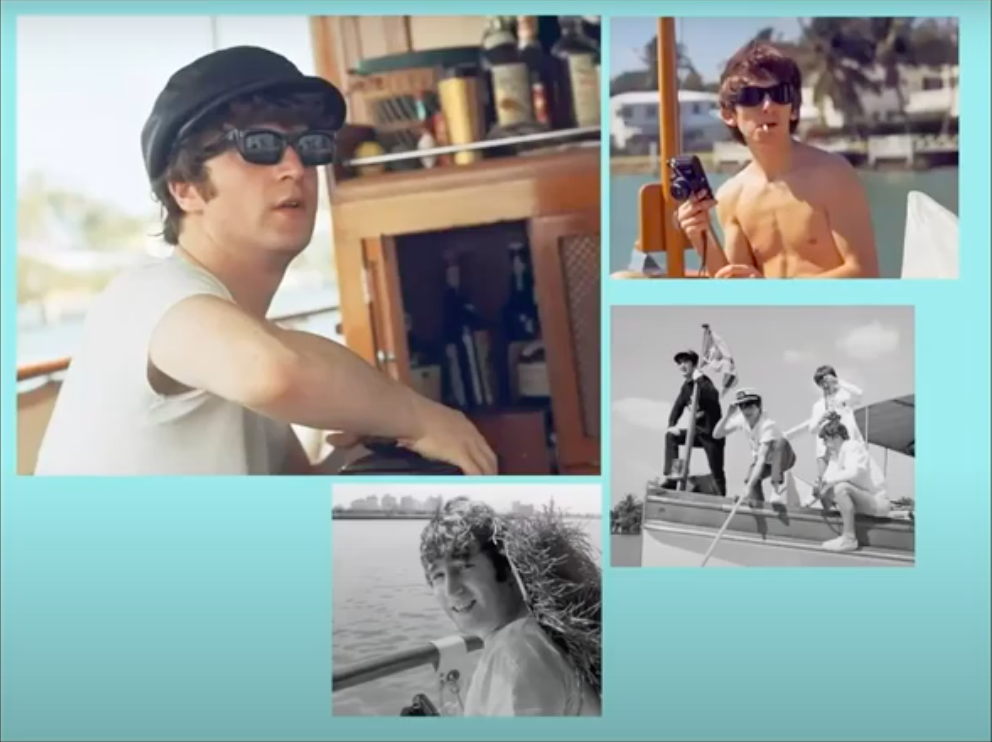 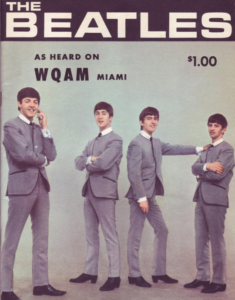 Miami's WQAM was at the scene when the Beatles arrived, and managed to turn their visit into a wealth of audio and visual memories. Click the image to learn more. 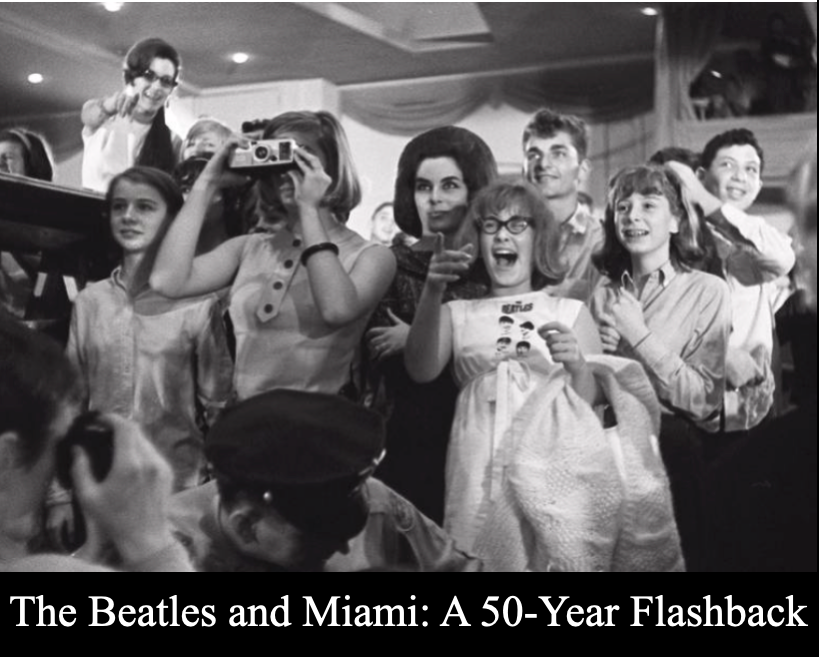 In 2014, the Miami Herald marked the 50th Anniversary of the Beatles' visit with deep-dive reporting about the week that became part of the city's history. From their arrival to their stay at the Deauville, click the image to learn more. 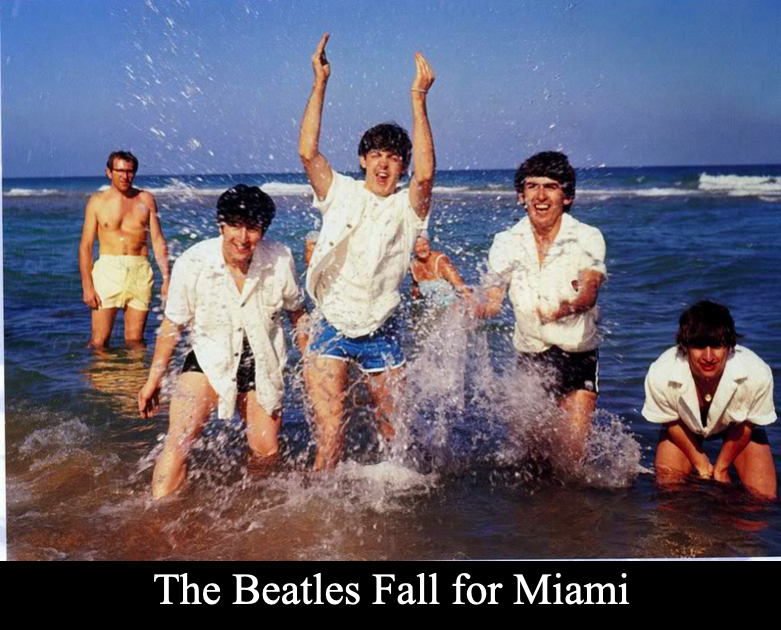 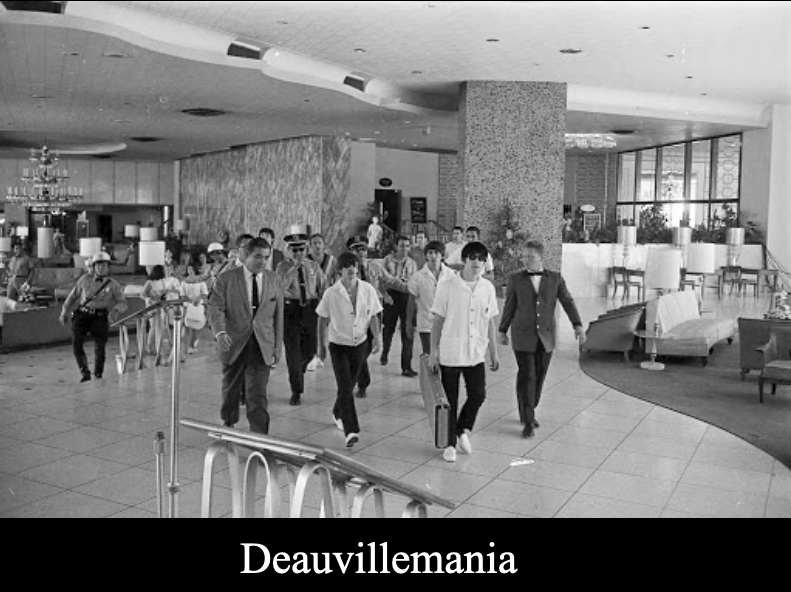 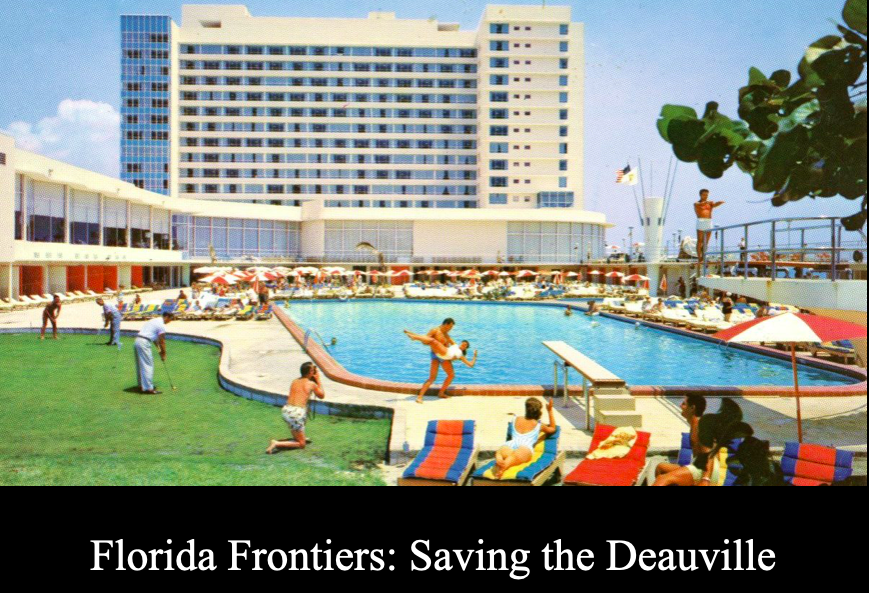 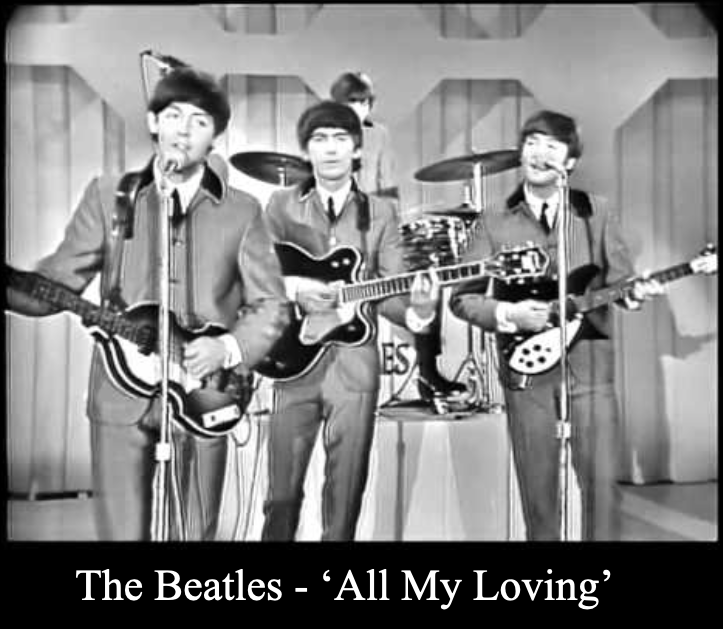 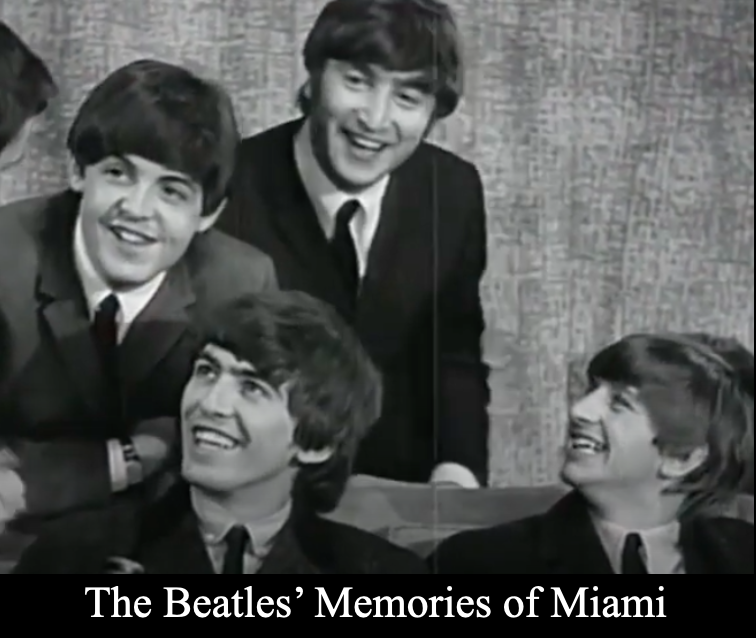 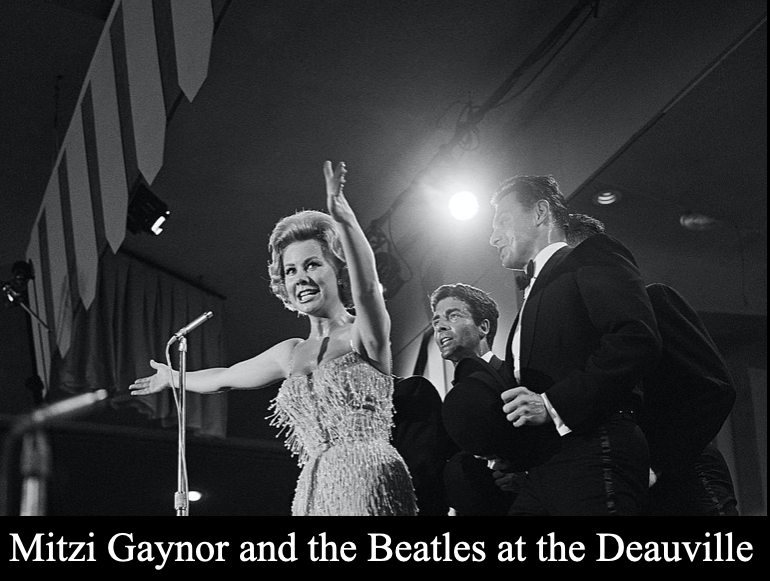 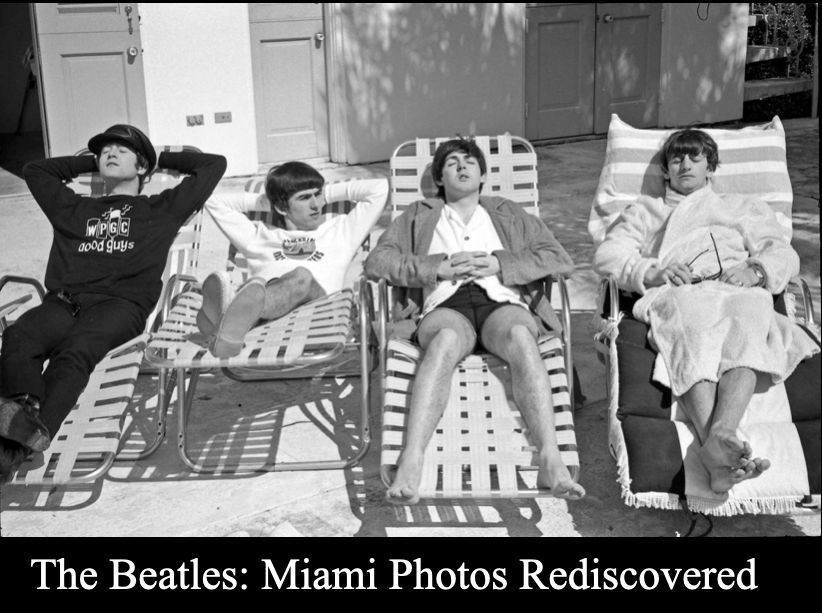 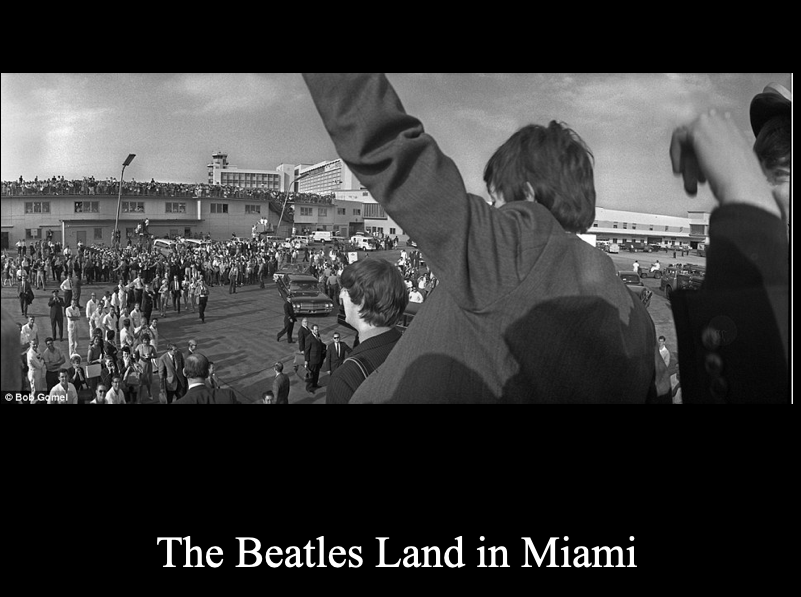 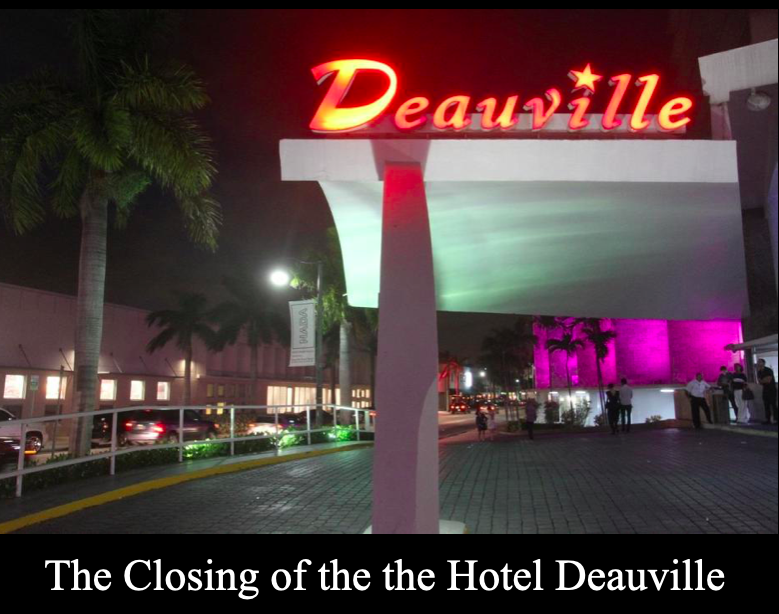 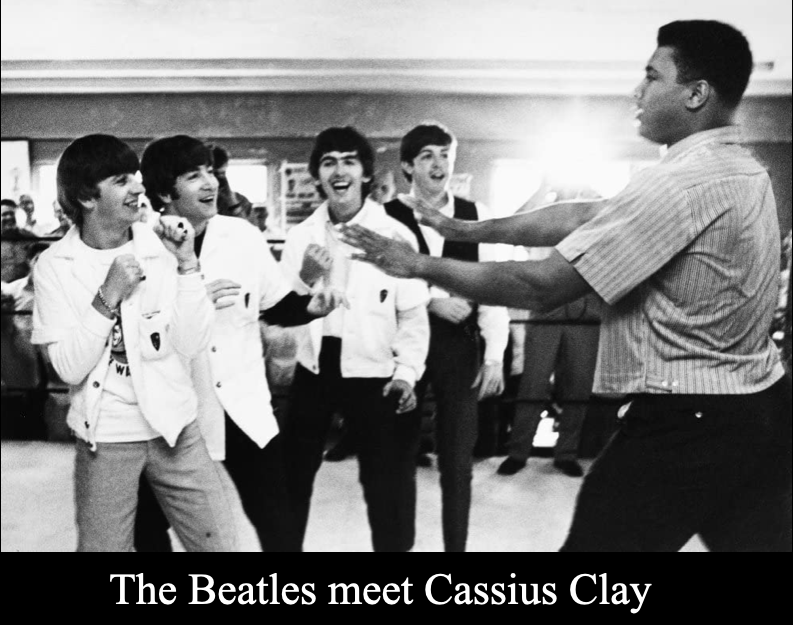 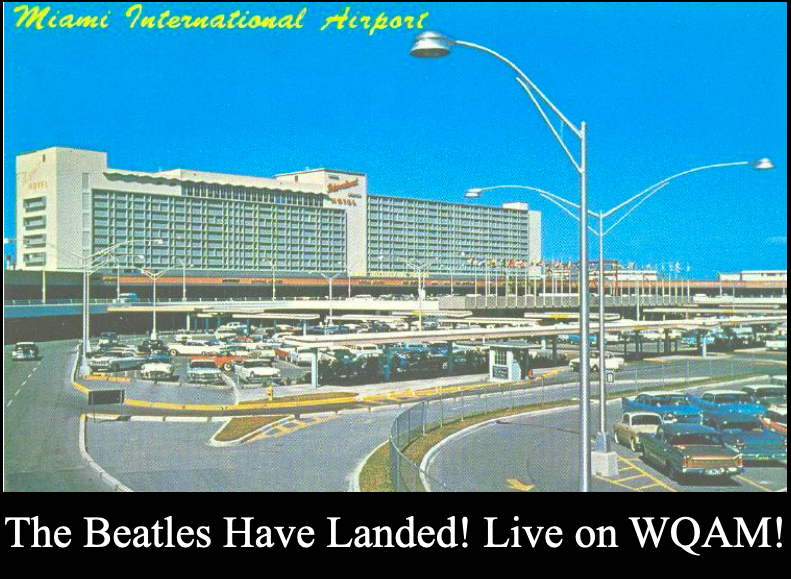 The Beatles in Miami: A Musical Photo Album 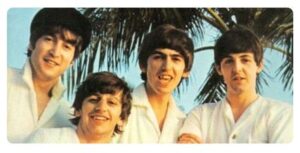